After months of waiting, the long-awaited Arduino Two is finally here 🙂 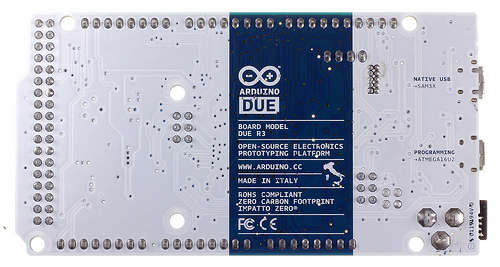 I have not yet had the opportunity to have it in my hands, but looking around in the network and specially in the official site, in this article i want to highlight the main news of this system compared to its predecessor Arduino UNO.
Well, what to say!
On the paper, the news are actually many and all derives from the new Atmel SAM3X8E CPU Cortex M3 with 32bits ARM architecture that replaces the old 8bits AVR:
1 – CPU Clock at 84Mhz (16Mhz compared to the previous version)
2 – 96Kb of RAM (compared to 2Kb)
3 – 512Kb of Flash (UNO had 32Kb)
4 – 12bits PWM and analog inputs (compared to 8bits)
5 – Output DAC – New for Arduino
6 – Higher number of PIN
7 – USB Host

Tis means an extremely higher processing speed, accuracy greatly improved and new possibilities thanks to the DAC and the USB host.

Performances are mainly related to the clock speed coupled with the 32bits (and of course more RAM).
With 32bit we are able to perform a 4bytes operation (8 x 4 = 32) with a single CPU clock. This means in an empirical way, that Arduino TWO might be about 20 times faster than Arduino UNO.

The most accuracy is related to the 12-bits analog inputs and PWM outputs: we have 16 times the old resolution, that means we have 4096 levels of conversion from analog to digital and vice versa compared to the 256 of the previous version. This allows a higher density of input data and a greater control on the PWM output.

The new features mainly concern the DAC pin (analog outputs, that is linear from 0 to 3.3 V) allowing for example to perform a MP3 file and hear it on the speakers connected to these outputs.

The only negative notes in my opinion (you have to be really picky though!), are the lack of an ethernet port – now essential in any application, and the fact that the TTL is 3.3V and not compatible 5V; with the wrong voltage you will fry pin or microcontroller itself. This leads to an incomplete compatibility with the existing shield or with third-party hardware.

Regarding consumption theoretically should be similar Arduino Mega although I did not find anything specific about it.

The programming instead always work through our Arduino IDE, updated to version 1.5 for the occasion, which contains additional libraries for the management of the new capabilities of the board. The programming mode is very similar to the old procedure.

Obviously, in this article we talked about a version out a few days ago and still in the testing phase. Time will tell if this card will completely replace the old Arduino, or if there will be a parallel market that will adapt depending on the final application. Surely those news lead further innovation in this field, such as to suggest that now the Arduino product may encroach further from the world of “geeks home” in the electronics professional.
Certainly a product like Arduino DUE, in terms of performance and precision is a product that is well suited for applications beyond entertainment home at a very attractive price (Arduino Store official price: Euro 39).
On the other hand, with this platform, it will be difficult to create embedded designs similar to those achieved with ATtiny85 or ATmega328 in standalone mode, but you can of course continue to use the old AVRs: as I said before, depending on the final application, you will find the best solution.